The Usanin Pyramid instead of the Maslow Pyramid

Maslow’s pyramid of needs is based on material well-being, which implies that a person’s spiritual development is impossible without a certain standard of living. Psychologists, sociologists and other scientists assert this, and people who are below the poverty line insist that they are not going to engage in soul development until favorable conditions are created for them. However, what if Maslow is wrong? What if it is not existence that determines consciousness, but consciousness that controls the events of your life?

The founder of the Prize “For the Good of the World” and public figure Alexander Evgenievich Usanin in his video blog claims that it is the spiritual development of humankind that determines the level of material well-being. Healthy economic growth is possible only in a society where there is morality, mutual respect and concern for each other.  And, if the emphasis is only on material foundation, then society will inevitably degrade morally.

In his video, Alexander Usanin turns upside down the “Maslow Pyramid”, which suggested for a long time that satisfaction of material needs precedes moral and spiritual development of a man and society.

In fact, we see that material wealth in itself is by no means a prerequisite for spirituality. In the most economically developed countries, spirituality and morality, on the contrary, are rapidly declining; the number of suicides, sexual perversions, and dissatisfaction with life is precisely due to the propagation of the idea that the main thing is material progress, and everything else is secondary.

Consider the current situation in Europe. The high level of technological progress does not guarantee the moral behavior of society. The collapse of families, state support of same sex marriage, violence, homicide, drugs addiction, depression, suicide and consumer relations between residents of Europe indicate that material foundation is not enough for formation of a happy and healthy society.

Experiments conducted by scientists at different times confirm that even under favorable living conditions, society either degrades or dies. A social experiment in 1954 in the United States, designed to help low-income groups of the population, ended in disaster. The state sponsored construction of a huge residential complex where all conditions were provided to improve the living standards of those who until recently had no roof over their heads. However, it failed. After some time, the quarter turned into a hotbed of crime, and a threat to society. Therefore, it was decided to demolish the housing complex, and its residents were sent to correctional facilities.

It turns out that material goods don’t make a high level of morality in society, but vice versa. Man does not live by bread alone.

In fact, Abraham Maslow did not actually create a pyramid of needs; he simply made a list of human needs. In addition, he was against building them in the form of a hierarchy, since each person has his own system of priorities and values. Maslow noted, “... People devoted to lofty ideals and values ​​are ready to endure hardships, torment, even to the point of death” ; “... The creative needs of people with a pronounced creative potential appear more important, more significant than any other. We must pay tribute to such people - the need they feel for embodying their creative abilities is not always caused by the satiation of basic needs, very often they strive creatively in spite of deprivation. ”

Where did this “pyramid of needs” come from? It was introduced by the marketer (!) Philip Kotler, completely distorting all the ideas of Maslow. This is what happens when a scientist’s ideas fall into the hands of a merchant. Who needed to promote this distorted scheme and even include it in the school curriculum? The answer to this question is obvious: such a position is extremely beneficial to large corporations that raise consumers. However, the orientation of society to the priority of consumption leads to degradation.

“Everything is very simple,” says Alexander Usanin. - In order to truly be happy, you need to turn this pyramid over. Everyone is accustomed to the idea that by successively satisfying needs, happiness can be achieved. However, this is not so! ”

If spiritual development, love and trust in people are put at the forefront and not the passion for consumption - you can live a happy life in a happy society. The ideal measure of goodness is trust in people. If you live in a “dog eat dog” society where the main thing is material, then your need for “protection” increases greatly, but if, on the contrary, in a society where you trust others, and they trust you, then the word “protection”  won’t even occur to you.

Alexander Usanin places the responsibility for the current situation in society on the media, which promotes ideas about material happiness, propagates immoral relations, and spreads fear and panic among people. Under its influence, society is moving towards collapse and degradation.

The way out of the situation should be oriented towards high moral and spiritual values, a demonstration of positive role models, and education that teaches people morality, respect, and care. Each person chooses a circle of his (or her) interests and communication, thereby determining their own standards. And the more people in your environment who are spiritually advanced, the higher your own level of development: spiritual and material. Maslow’s pyramid is wrong because a high level of material development is impossible without spiritual development. Moreover, focusing only on the well-being of the body is deadly for society.

“It's time to overturn the Maslow Pyramid from head to toe,” says Usanin. - High moral values ​​are the basis of the spiritual growth of people and improve the quality of their relationships with each other. Only people caring for each other leads to stability, security and the comprehensive prosperity of society! If we put at the forefront, not the passion for consumption, but spiritual development, love and trust in people, we can live a happy life in a prosperous society! ”

The updated version of the pyramid can be safely called the "Usanin Pyramid." 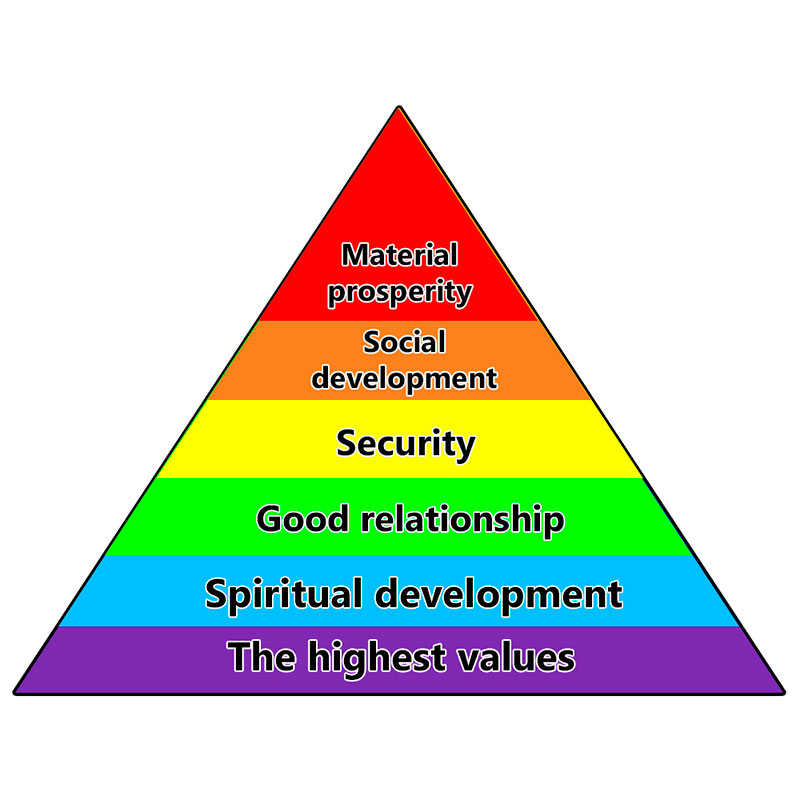 Based on the publication “Arguments of the Week”